Tegan & Sara have been making music together since they were 15 years old and have achieved incredible success in the indie music world. The Canadian duo’s sound has evolved over the years, but their commitment to crafting pop-infused folk tunes with a distinctively girlish charm remains intact. In honor of Tegan & Sara’s impressive career, we’ve rounded up Top 10 Secrets About Tegan & Sara! 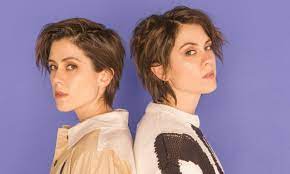 1) Tegan & Sara are identical twins who are only two minutes apart, making them true sisters.

They were born on September 19, 1980 in Calgary, Alberta, Canada and first began writing music together when they were just 15 years old.

The duo’s latest album, “Love You To Death” (2016), was their highest-charting record to date and was certified gold in the US and platinum in Canada.

In 2014 they launched The Tegan & Sara Foundation which is dedicated to raising funds for programs that help fight against discrimination based on gender identity or sexual orientation.

4) In 2015, Tegan & Sara became the first openly gay artists to be nominated for a Grammy Award in the Best Country Duo/Group Performance category.

Tegan & Sara were also nominated for a Juno in 2017, making them the first openly gay artists to be up for an award in that category as well.

6) Their music has been used in various video game soundtracks and other media outlets.

Tegan & Sara’s track “Back in Your Head” was featured in the 2008 video game Rock Band 2 and they released an exclusive track titled “The Con” for the 2012 game Sleeping Dogs. Their music has also been used in film, with songs like “Walking With a Ghost”, “Closer”, and “Everything Is Awesome!!!” having featured prominently on The LEGO Movie soundtrack.

7) Tegan & Sara have collaborated with countless big-name artists over the years.

Some of their collaborators include Taylor Swift, Lady Gaga, The Killers, Ryan Adams, RAC, Tiesto, and Chromeo.

8) They are currently working on releasing a new album of unreleased material from their early years.

The album will consist of unreleased songs written between 1998 and 2004, some of which were featured in a documentary about the duo’s early days titled “Get Along” (2012). The album is currently untitled but is expected to be released sometime this year.

High School is a memoir that chronicles their life growing up as identical twins while On Top Of The World is an interactive book-based video game in which the player goes on a virtual tour with Tegan & Sara as they explore different cities around the world.