Windsor Castle is the oldest and largest occupied castle in the world. It has been the family home of British kings and queens for almost 1,000 years. Here are 10 secrets about this royal residence: 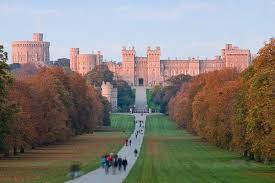 1. The Queen spends most of her private weekends at Windsor Castle.

Windsor Castle is the Queen’s favourite weekend retreat. She often spends her weekends here, especially during the Easter and summer months.

2. Windsor Castle is the largest occupied castle in the world.

3. The first Windsor Castle was built in the 11th century.

The original wooden castle was built by William the Conqueror. It was replaced by a stone castle in the 12th century.

4. The castle has been home to British kings and queens for almost 1,000 years.

Windsor Castle has been the family home of British monarchs since the time of William the Conqueror. It is the oldest continuously inhabited royal residence in the world.

5. The castle was used as a prison during the English Civil War.

During the English Civil War, Windsor Castle was used as a prison for Charles I’s wife and children.

A fire broke out in the Queen’s Private Chapel in 1992, causing extensive damage to the castle. over 100 rooms were affected and it took 15 months to repair the damage.

7. The castle has its own post office, police station and fire brigade.

Windsor Castle has its own post office, police station and fire brigade. This is because the castle is classed as an extra-territorial enclave, meaning it is not subject to the jurisdiction of the local authorities.

8. There are over 50 resident birds at Windsor Castle.

The castle grounds are home to over 50 different species of birds, including swans, ducks and peacocks.

9. The castle has its own herd of deer.

The royal hunting ground of Windsor Park is home to a herd of red deer. The deer are cared for by the Crown Estate Rangers.

10. You can visit Windsor Castle for free on certain days of the year.

If you want to visit Windsor Castle, you can do so for free on certain days of the year. These include Easter Sunday, the anniversary of the Queen’s coronation and the Queen’s birthday.